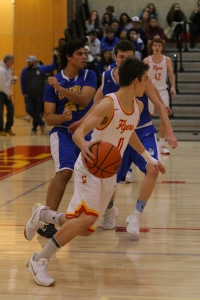 The Flyers basketball program has been soaring across all three divisions thus far this season.

Most notably, the varsity team is coming off of an impressive win against St. Anthony’s this past Tuesday (January 23).

All three divisions will be on the road visiting the St. John Cougars in West Islip tomorrow. The freshman game begins at 4:00 p.m.; the JV game tips at 5:45 p.m., and the varsity cagers will take the floor at 7:30 p.m.

The newest members of the Chaminade family – those eighth graders who recently were invited to become future Flyers – are encouraged to attend a second open house this upcoming Saturday (January 27). This open house, unlike the one in October, will be led by both a member of the faculty and several current students from all divisions. The tour is a great chance to see the opportunities Chaminade offers to its students, as well as to ask questions and learn more about the school. Those students that enjoy their tour and have decided to attend Chaminade can register in the AAC either next Tuesday or Wednesday (January 30 or 31) from 3:30 to 7:30 p.m.

Taking to the Mats

Next Wednesday (January 31), Chaminade’s varsity and JV wrestling teams will be hitting the road to take on the Friars of St. Anthony’s.

Both squads have had great seasons to date, so the match is a highly anticipated affair for all wrestlers. Go Flyers! 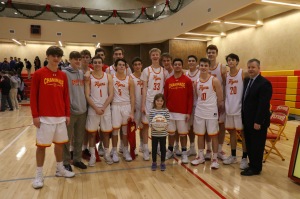 This past Tuesday (January 23), the Flyers varsity basketball team defeated the St. Anthony’s Friars, 61-41. Playing in the AAC, Chaminade’s hoopsters enjoyed the support of numerous students in the stands on their way to a 20-point victory. The team remains undefeated in Catholic League play and looks to continue to build off of its success tomorrow against St. John’s.

The varsity bowling team finished off its regular season in typical fashion at the AMF Babylon Lanes this past Tuesday (January 23). The team won by the score of 7-2 to remain undefeated this season. Chaminade’s bowlers are now preparing for the playoffs, focused on their goal of winning the league title again. Roll Flyers!

Today was a special day for the Chaminade family. On the eve of Chaminade Day, today’s Mass dedicated to the Celebration of the Feast of Blessed William Joseph Chaminade, but the yearbook dedication was also surprisingly announced.

The Mass was celebrated by the Rev. Malcolm Burns, pastor of Corpus Christi Church in Mineola. His homily included a special message about using our talents to be radical missionaries. After Mass, the Editor-in-Chief of the Crimson and Gold yearbook, Liam Joyce ’18, spoke on behalf of the staff. He announced the name of the 2018 yearbook, “Ascension,” as a reminder of the ascending heights Chaminade continues to reach.

Then, “Ascention” was dedicated to the President of Chaminade, Bro. Thomas Cleary ’81, who has helped in this ascension to greatness at Chaminade since taking his first vows in 1983. In his acceptance speech, Bro. Tom said, “My wish for you is that you find something in your life that makes you as happy as the work I have been blessed to do. You are what makes Chaminade the best school anywhere in New York State.”