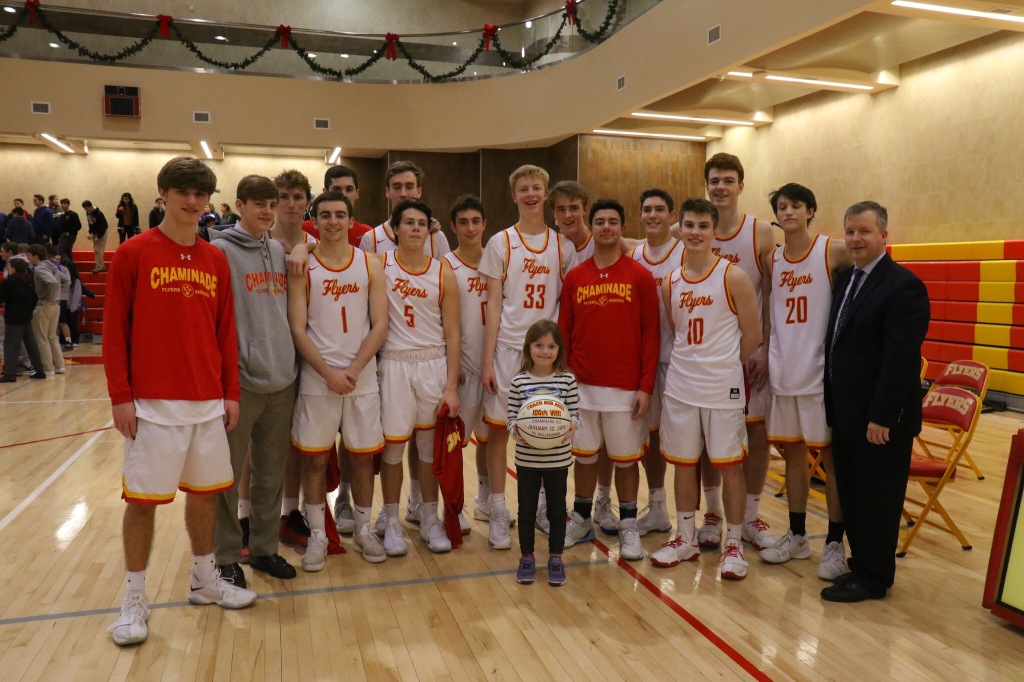 After capturing the CHSAA title for a second time in three years last season, the coaching staff and players who comprise the Chaminade varsity basketball team knew that repeating as league champions in 2018 would be no easy task. The Flyers always play a difficult schedule, but this season, teams were likely to have a little extra motivation when facing the Crimson and Gold. So far, the team has handled this challenge well, compiling a 12-3 overall record while remaining unbeaten in Catholic League play.

At the beginning of every season, Chaminade relies on its veterans to provide leadership on the floor. Seniors Bobby Connors and Brendan Maguire have certainly carried much of the load, with both averaging double figures in points per game. However, the rapid maturation and development of younger players has been the surprising story of the season for the Flyers. Starting guard Michael O’Connell ’20, who appeared on the varsity squad as a freshman last season, is also averaging double-digit points. First-time starter Liam Drennan ’19 has provided the Flyers with solid rim protection, and his rebounding ability has given the team an advantage in the paint against many opponents. Sophomores Kieran Dorney and T.J. Long have also provided the Flyers with consistent scoring.

The Crimson and Gold have played suffocating defense, and weaker opponents have struggled to generate any offense against the Flyers. Chaminade’s guards have the quickness to keep up with any of their CHSAA counterparts; the team also collectively possess the length to block passing lanes and create plenty of turnovers. This great defense often leads to transition buckets for Chaminade, but when the Flyers slow down and play a half-court offense, they move the ball well and consistently find the best open shot. This unselfish style of play has been the key to Chaminade’s success on the offensive end of the floor.

Head Coach Robert Paul ’92 always does a tremendous job motivating his players to compete against top competition. His dedication has turned the Chaminade basketball program into one of Long Island’s best. Year in and year out, Coach Paul puts his team in a position for championship success, and this year is no exception. The longtime leader earned his 100th career victory this year in front of a home crowd when his team defeated Kellenberg, 76-23, on January 12.

The Flyers have dominated their league opponents thus far, but a number of non-league squads have provided much more significant challenges. The Flyers started strong away from the CHSAA with a nail-biting road victory over Cardinal Hayes. However, the team has struggled since. Chaminade suffered its only home loss against traditional heavyweight Long Island Lutheran. They also met with a disappointing result on the road against Christ the King, a team that has multiple nationally-recruited players. Finally, at the Nassau Coliseum this past Sunday, the Flyers suffered a defeat against red-hot public school power Half Hollow Hills East.

While these losses certainly aren’t the results that any of the Flyers were hoping for, the team is trying to view these non-league games as learning experiences. Players know the team must improve in certain areas in order compete for another championship down the stretch.

“We need to cut down on turnovers and become a little sharper on offense,” explained Long. “When playing against good teams, we’ll need to play at our peak.”

The Flyers will face a great test when a much improved St. Anthony’s team comes to the Activity Athletic Center tonight for what should be a fantastic matchup of two rivals.

“We have to bounce back and not feel sorry for ourselves after our loss on Sunday,” said Coach Paul. “We have a more important league game [tonight].”

The AAC should be electric as the Flyers get set to begin the second half of their season. Tip-off is at 7:30 p.m.