Nearly 60 million human lives in the womb have fallen victim to abortion since the Supreme Court of the United States sided with Roe in the infamous 1973 case. In response to this tragedy, Chaminade High School’s Catholics for Life club defends the sanctity of human life, from conception to natural death and every stage in between, during its weekly meetings in Hearst Auditorium on Mondays after Sodality.

Moderated by Mr. Michael Strandberg ’09, with the assistance of Bro. Lawrence Syriac, S.M. and Mr. Benjamin Volpe, club members lead conversations about the pressing issues confronted by modern Catholic youths. However, it is the students who deliver presentations and advocate their stances on a variety of issues. Presentations include topics such as abortion, euthanasia, and religious freedoms of expression. These controversial topics spark debate among the group’s members, deepening their understanding of the difficulties encountered from an increasingly secular 21st century society. Every point is heard in an effort to include all students in the conversation, creating a truly unique atmosphere.

“The students begin to take ownership of their faith when they are challenged to defend its teachings against secular arguments,” explained Mr. Volpe.

Armed with all the knowledge they acquire through the meetings, students have an opportunity to defend their beliefs during events throughout the school year. Some of the more notable activities are the Stand Up for Life protest on Route 25A in Huntington, XLT (which includes prayer and dinner at Kellenberg High School), workshops and presentations at Sacred Heart Academy, retreats to Founders Hollow in upstate New York, and service events at places such as soup kitchens.

It is through these events that the mission of Catholics for Life is fulfilled.

“Our students seek to understand, protect, and enhance the religious and civil rights of all people, especially Catholics,” Mr. Strandberg explained. “We defend the rights of the unborn, the elderly, those with special needs, those facing religious discrimination, and other groups whose rights are not always protected.”

One event, though, undeniably stands out from the rest. All members of Catholics for Life attend the annual March for Life, a national demonstration of hundreds of thousands of pro-life supporters who descend on the nation’s capital to affirm proudly their defense of the voiceless. Early on a Friday morning each January, over 100 students board coach buses en route to Washington, D.C., where they march in solidarity at the country’s largest protest. Several Chaminade graduates accompany the students, a testament to the significance of the event.

This year, the club will once again march along Constitution Avenue from the National Mall to the steps of the Supreme Court, braving the bitter cold to fight for the reversal of the Roe v. Wade decision and encourage American lawmakers to recognize the right to life begins in the womb.

“When I first marched in Washington with Chaminade students, we were the only high school present, and the average age of participants was over 60 years. Now, the march is a youth march over 200,000 strong. The average age is in the early 20s. To be present for this event is to witness the grace of God and the power of the pro-life position” explained Bro. Lawrence.

If a student is passionate about such issues or simply wants to learn more about these matters, Hearst Auditorium is the place to be on Mondays from 3:50 to 4:20 p.m.

“Our meetings allow students to understand the ways Catholics approach sensitive topics regarding life. The club provides a great opportunity to learn about these topics, which helps develop students’ faith,” said club president 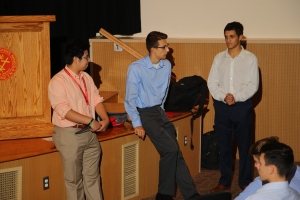 At any point in the year, students are welcome to join this club and partake in all that Catholics for Life has to offer. A pillar of the Chaminade education, the active involvement of Catholic youth in defending life through organizations like Catholics for Life is vital to the sustainability and growth of the Church for future generations.