Crew
The varsity crew team enjoyed success over the weekend after its strong performance at the Head of the Charles Regatta in Boston, Massachusetts. Competing against the top club and scholastic programs from across the United States, Canada and England, the varsity eight finished in 27th place out of 86 boats. The varsity four came in 58th place out of 85 competitors. The Flyers are preparing for one of the largest rowing competitions in the world, as they take part in the Head of the Schuylkill Regatta this Saturday.
Regarding the upcoming regatta, senior rower Shane Barry explained, “For next week’s regatta the team will be continuing with our normal training routine of conditioning workouts and extensive water time before we head to Philadelphia on Saturday.”

Soccer
On October 19, the varsity soccer team traveled to New Jersey to compete against the No. 1 ranked team in America, St. Benedict Prep. Unfortunately, the Flyers got off to a relatively slow start, and were unable to claw back into the game. The team lost 3-0, but was proud of the performance against such an elite competition. “Playing St. Benedict’s was a great experience for the team,” explained co-captain Justin Caccavo ’20. “Although we lost, we performed much better than last year and held our own against the best high school team in the country.

I’m glad we played St. Benedict’s just before we go into our playoff run, because we can bring the intensity and high speed of play that we mustered in that game into the postseason.” The team looked to rebound on October 23, when they took on St. Anthony’s in a league match. After conceding a goal due to a defensive lapse in the first two minutes of the game, the team did not put their heads down. The team kept pushing and putting immense pressure on the Friars for the rest of the game. After Luca Iacono ‘20 scored a beautiful volley from outside of the box, the Flyers were able to keep pounding and netted two more goals in the win. Gio Tallini ‘21 and Matt Auerbach ‘21 scored the second and third goal. The team is prepared to continue their success in the postseason on their quest for a fifth straight championship.

Varsity Football
Coming off of a strong win against league rivals Kellenberg, the Flyers looked to stay hot in a conference game against the Xavier Knights. In a defensive battle, the Flyers’ 7 points bested the Knights’ 6. Mario Fischetti ’21 lead the game in rushing, as he ran for 124 yards, and managed to score Chaminade’s only touchdown. On the defensive side of the ball, the Flyers dominated in all facets of the game. Brandon Coward ‘20, Aidan Cappelino ‘20 and Patrick Gardener ‘20 all lead the team with 13 tackles. Defensive backs Patrick Noonan ‘20 and Dylan Lamelo ‘20 played lockdown coverage and applied constant pressure throughout the entire match. 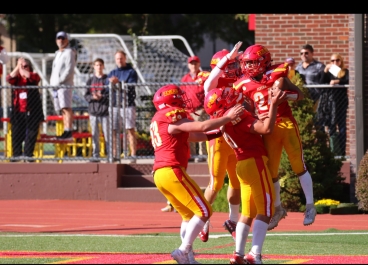 Conner Garzone ‘20 and Robert
Booth ‘20 each contributed a sack to the impressive defensive victory. “This is a really special group we have this year,” explained Patrick Noonan ‘20. “We’ve come a long way, and I think what’s keeping us together and keeping us successful is our unity. We’ll be ready for the playoffs in November when it matters most.”

Cross Country
This past weekend, the varsity Cross Country team traveled to Van Cortlandt Park in the Bronx.  The Flyers competed against a multitude of schools from all across the northeast. The Varsity team, led by Kyle McLean ‘20 and Owen Sweeney ‘22, came in fifth place out of twelve. The Crimson and Gold are looking ahead to this Sunday, as they travel to Sunken Meadow State Park to compete in NSCHSAA League Championship.
Varsity runner Nicholas DeVita ‘20 said the following in regards to the upcoming Championship meet: “The team is preparing for the championship by training harder at practice while also traveling to different state parks to practice as well. The meets that the team are competing in are much more competitive in terms of the teams racing.”