Last Day of School for the Class of 2019

After four years, the Class of 2019 is rapidly approaching their final day of school at Chaminade. The senior comprehensive exams began this past Wednesday, May 1, and will conclude on Wednesday, May 8.  The end of the final exam marks the last day of school for the seniors. The class will enjoy a long break until they officially graduate on June 2. A video featuring the thoughts of the seniors on their last day of classes can be found here.

The Reg’s Rock Lacrosse Day for Heroes is one of the most special events in Chaminade athletics. The annual competition honors Sgt. James J. Regan ’98, who was tragically killed in action in February 2007 and is one of Chaminade’s Gold Star Alumni. The money raised from the event is donated to the Army Ranger Lead the Way Fund, which helps active duty and wounded elite Special Operations U.S. Army Rangers and their families. The event features an exciting matchup between two of the best teams in the nation: the Chaminade Flyers and the Manhasset Indians. The event is held at Chaminade on this Saturday, May 5.

Next Friday, May 10, the junior class will be given the opportunity to participate in the junior blood drive. Following the success of the recent senior blood drive held on March 15, Chaminade looks to once again help those who require blood transfusions receive the help they need. According to American Red Cross, one donation can save up to three lives. With this in mind, a large portion of the class of 2020 has already signed up to be donors.

The Parish Religious Education Programs offers students the opportunity to teach religion to young children at local parishes. After a year’s worth of service and dedication, members of PREP attended the Closing Prayer Service on Monday, April 29. The service included a reflection from Mr. Daniel Haslbauer ’11 on his vocation and the distribution of statues of Mary, created by the Little Sisters of the Poor. “PREP has been a great experience and has allowed me to strengthen the Catholic faith in others,” reflected John D’Ambrosio ’21. 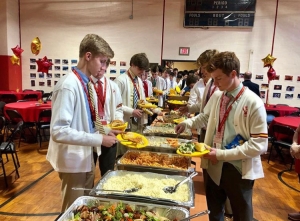 To celebrate the final day of classes for the graduating seniors, the entire class enjoyed a special luncheon on Tuesday, April 30. The class appreciated some social time together, joined by several members of the faculty who marked the occasion alongside them. The lunch; sandwiches, pasta, salad, and chicken; was prepared by the staff of the Courtyard Cafe.

Building off the program’s success last year, all divisions of lacrosse are relishing a tremendously successful season. The varsity team, led by Coach Moran, is currently ranked second in the nation with a 10-0 record, cruising past competitors like Syosset, Massapequa, and St. Anthony’s.