At any customary Mass, the conclusion of the recessional hymn would signal the return to class for the 1,700 students gathered in the Activity-Athletic Center. However, on Wednesday, March 20, Co-Editor-in-Chief of the Crimson and Gold yearbook Dan Garcia ’19 walked to the lectern to announce the person to whom the 2019 yearbook would be dedicated.  He announced the theme of the yearbook, Ignite, discussing the advancements Chaminade has made over the years, from a new block schedule to iPads and the advanced course offerings.

However, what really helps to ignite the spark of passion in students is the stewards of Chaminade’s commitment to educate young men intellectually, physically, and spiritually–the faculty and staff of Chaminade High School. Dan then connected the history of the recent growth of Chaminade to a faculty member who was here when Chaminade first made computers and computer education available to students. As Dan continued to describe all of the ways this faculty member has served the Chaminade family for decades, the audience began to recognize to whom Dan was referring: Mr. Thomas Giovannetti. For thirty-eight years, Mr. Giovannetti has faithfully dedicated himself to Chaminade High School, embodying the motto of the Chaminade Man.

As Mr. Giovannetti headed to the podium to receive his award with his usual humility, the Chaminade family gave him a standing ovation with roaring applause that lasted several minutes.  “When I heard my name announced, I was overwhelmed, especially when you guys clapped for so long. I’m happy beyond belief, and it is the best thing that’s ever happened to me. To celebrate, I’m going to Disney World next week with over 400 of my closest friends,” exclaimed Mr. Giovannetti when he took to the podium to thank those in attendance.

After graduating from Adelphi University, Mr. Giovannetti began teaching at Chaminade in 1981 as a geometry teacher for freshmen and sophomores.  He joined the faculty during an era when Chaminade was beginning to modernize its pedagogy with the introduction of new technology. “When the school first purchased computers in the 1980s, he taught the students basic programming skills and how to type properly with these new machines,” remarked Dan Garcia in his speech. Since the early ‘80s, Mr. G. was a familiar face around Chaminade, sharing his time, wisdom, and charm with the family that is Chaminade High School.

“I’ve known Mr. Giovannetti since I joined the community in 1981. It was his first year teaching; he was always approachable, always with a smile, and always understood the mission,” described Bro. Thomas Cleary, S.M. ’81. 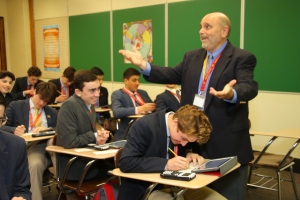 AJ Rumfola ’19, a former student of Mr. Giovannetti’s, also recalled his interactions with this year’s honoree, “During my sophomore year, he tremendously helped me develop my math skills. However, I’ll remember him most for his sense of humor; his frequent jokes lit up my mornings.”

Later in his career, Mr. Giovannetti became a guidance counselor for the junior class. By venturing into new areas of the Chaminade community, more and more students crossed paths with Mr. G.  “You didn’t have to have him as teacher to know him. He was here for everything – evenings of recollection, guidance meetings, and the senior trip to Disney. He always had a prominent place in our school,” explained Mr. Matthew Markham ’06.

Mr. Giovannetti’s willingness to offer his time and effort beyond the classroom was a defining aspect of his career at Chaminade. Perhaps his favorite part of working at Chaminade was his role as the coordinator of the senior trip to Disney World. In fact, for the past 19 years, he has accompanied the senior class on their trip to Florida. “This is the best thing I do here because I get to see all the seniors enjoy their friends and have a great time in a magical place. That puts a smile on my face,” said Mr. Giovannetti.

Next Thursday, he will depart on his final flight to Disney with the seniors. After thirty-eight years, Mr. Giovannetti will conclude this chapter of his life, leaving a profound impression upon the Chaminade family and the school’s development.

Concluding his career at Chaminade by having the yearbook dedicated to him was a fitting tribute for someone who has made an immeasurable contribution to the Chaminade family. The student body was delighted to see Mr. Giovannetti earn this recognition. “Seeing the look on his face when he was announced as the recipient of the yearbook dedication was wonderful. I’m glad to know that the yearbook staff chose to honor him for his passion and enthusiasm,” added Matthew Sotelo ’21, a current student in Mr. G.’s precalculus class.

Mr. Graham Otton ’05 concluded, “For a man who does so much work behind the scenes, he never wants the spotlight for himself. It was fitting today that he got to stand in front of so many people who benefited from his tireless efforts and more importantly, his kindness.”

Beginning in September, Mr. Terence Fitzgibbon ’00 will take on the role of the mathematics department chairman. “As a former student of Mr. Giovannetti and now his colleague, I see him as an inspiration. His love for his students has always been evident above all else, and his commitment to the school community as a whole and the mathematics department, in particular, has been unparalleled throughout his tenure,” remarked Mr. Fitzgibbon.