On the final Friday of every January, Chaminade High School remembers and celebrates the life of Blessed William Joseph Chaminade, the founder of the Marianist order and the school’s namesake. Both a Mass in his honor and a 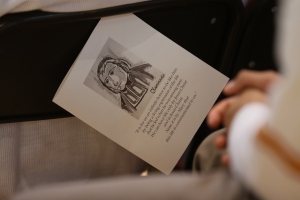 three-day weekend provide an opportunity for the Chaminade family to reflect on Father Chaminade’s works, life, and the ideals upon which our school was founded. As members of the Marianist family, we recognize the significance of Blessed Chaminade, who founded Society of Mary in 1817. His feast day is officially celebrated on January 22, the anniversary of his death.

Father Chaminade was a Catholic priest who moved to Bordeaux, France during the French Revolution. At that time, the Roman Catholic Church was placed under French authority. Despite this dangerous era, Chaminade continued to support the Pope as the Church’s true authority. This commitment to God came at great risk, as Father Chaminade would have been killed if he were caught serving as a priest.

In 1795, Father Chaminade went into exile in Zaragoza, Spain.  Here, he habitually visited the Basilica of Our Lady of the Pillar where he would pray. While praying, Father Chaminade received the inspiration that would guide his life’s work and give him the courage to work toward the restoration of Catholicism in France. He returned to Bordeaux and began to promote the Marian Sodality. By inviting young lay people to perform act of charity and examine their faith, Father Chaminade hoped to end the secularization of France. More than 200 years later, Sodality remains an important aspect of the Marianist community and holds a prominent place in Chaminade High School’s apostolic activities.

As the popularity of Sodality spread, Father Chaminade sought to share more broadly his teachings. In 1816, Father Chaminade collaborated with a young noble woman named Blessed Adele de Batz de Trenquelleon in the founding of the Daughters of Mary Immaculate. The following year, Father Chaminade founded the Society of Mary, a religious order whose primary mission was the re-Christianization of a thoroughly secularized society.  Relying on the guidance of the Blessed Virgin Mary, Fr. Chaminade proposed to achieve this re-Christianization through education, sodalities, retreats, and collaboration with faithful lay Catholics.  Even to our own day, this apostolate remains the primary focus of the Society of Mary.  These orders spread and taught the faith, eventually expanding beyond France and arriving in America in 1849.

Father Chaminade was able to advance the Catholic faith, and in turn, helped it survive during a period where those who practiced the faith faced great dangers. In 1850, Father Chaminade died in Bordeaux, surrounded by members of the Marianist community he nurtured. His commitment to faith and perseverance during times of turmoil are honorable and serve as a model for how we all should approach the complex and uncertain times in which we live. His actions did not go unnoticed, as Pope John Paul II bestowed Father Chaminade the title of Blessed in 2000. 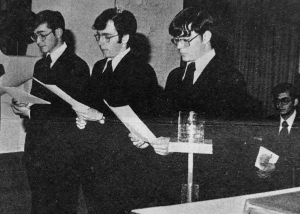 Chaminade Day is a day for the students of Chaminade High School to reflect on the life and legacy of the founder of the Marianists. Students are encouraged to pray for his canonization and to think about how they can apply and promote his teachings in their daily lives. Father Chaminade’s commitment to his faith and the spreading of the Marianist message will continue to serve as a model for all Catholics.