Closing Out The Year…

Beginning next Wednesday, students will take comprehensive exams in each of their six major subjects.

As usual, Religion is up first on Wednesday, followed by Science and Math.

The following Monday, June 18, is the Language exam, followed by Social Studies, and finally, English. Good luck studying this weekend!

Members of the Gold Band will march in the annual Mineola Portugal Day Parade this Sunday.

The parade begins at 11 a.m. at the Activity-Athletic Center and continues east on Jericho Turnpike, then south on Roslyn Road.

The band will play “God Bless America” and “Sir Duke” while they march. If you need a break from studying, here is a great way to get some fresh air in the process!

Racing To The Finish Line

Today and tomorrow, junior Dylan Ameres will be representing the track & field team by competing in the New York State Championship Meet near Syracuse, NY.

He will be competing in the long jump and triple jump events at the meet.

Dylan has won several gold medals for outstanding performance in meets this season, and we wish him the best of luck at bringing home a state title!

Members of sodality and their moderators gathered together on Monday for their final meeting of the year.

Assembling in Darby Auditorium, they prepared for next year by welcoming new members during a consecration ceremony.

Afterward, they celebrated the end of the school year with pizza and soda in the cafeteria.

The End Of The Beginning…

Last Sunday, the 374 members of the class of 2018 received their diplomas during their commencement exercises at the LIU Post campus.

John Paul Lynch (pictured) was awarded the prestigious Chaminade Man of the Year Award for his dedication to the community – including his volunteering as a catechist for PREP, writing for Tarmac, playing on the basketball and volleyball teams, and assisting patients and staff at a local hospital. Read more about the awards won by members of the class of 2018 here.

Fresh Off The Presses… 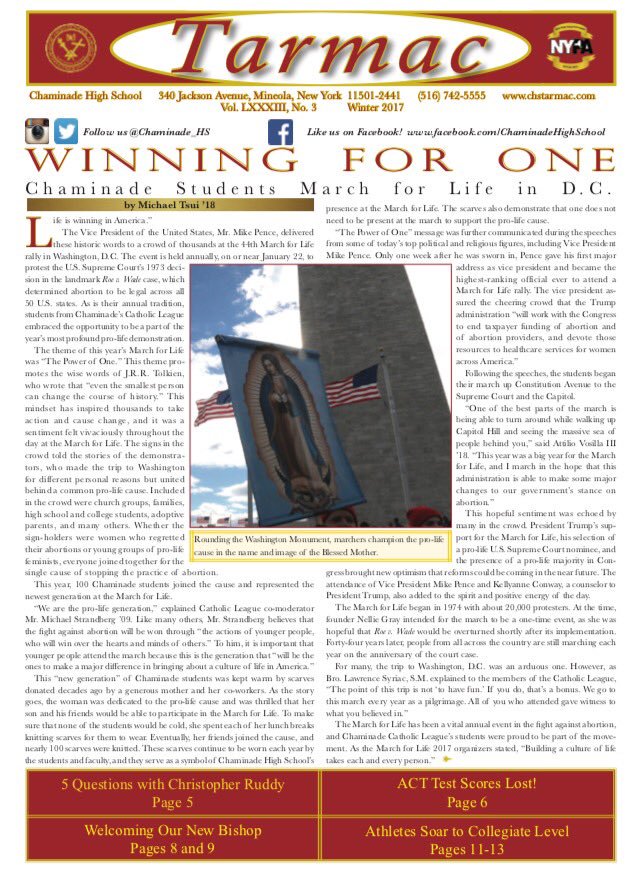 Tarmac’s Spring 2018 issue has just finished printing and will be in your mailboxes shortly.

Articles in the issue include an editorial discussing Hollywood’s endless chain of sequels, a comprehensive look at artificial intelligence, an analysis of the Fortnite craze, and two glimpses at the entrepreneurship of recent Chaminade graduates.

Our final issue of the year, covering graduation, the Man of the Year Award, and all spring sports, will be printed in late June!