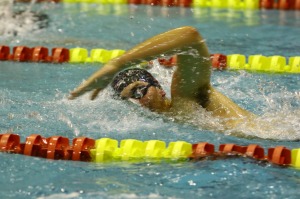 Those members of the varsity swimming and diving team who qualified for the New York State championship meet are competing today (March 2) and tomorrow (March 3) at the Nassau County Aquatic Center in Eisenhower Park. These swimmers hope to add more hardware to the team’s already impressive 2018 collection, as they enjoyed a successful dual meet season and earned the city championship crown. Entering this weekend’s meet, Chaminade swimmers boast four of the fastest-seeded times, but the competition will be fierce at this last meet of the campaign.

Next Wednesday (March 7), the student body will gather in the AAC for the final school-wide Mass before Easter. In this season of Lent, many religious events have been organized across Chaminade’s campus to provide busy students with the opportunity for reflection and thought, and Wednesday’s Mass will be no exception.

After a successful run of this fall’s play, “Comedy Tonight,” The Darby Players have continued their hard work, putting the finishing touches on their spring show –  “The Addams Family.” As in the past, tickets may be purchased online, where patrons may even choose their exact seating location! Opening night is set for next Friday (March 9).

As students are reminded by the creative posters around the halls, the Lenten Food Drive has begun. With its signature catchphrases such as, “One School CAN Make a Difference,” these signs encourage students to bring in canned food items, which will be donated to the many people who live on Long Island who suffer from hunger. Many homerooms feature internal competitions, with rewards going to whoever brings in the most food items. Be the man – bring in some cans!

The Beginning of the End

This past Wednesday featured a highly anticipated evening for the senior class. Senior Night featured the intramural basketball championship tournament, three-point contests for both students and teachers, and a Seniors vs. Faculty full-court basketball game. Before the main event, the senior class had the opportunity to watch their very own “3C Video,” recorded on the opening days of their freshman year. It was amazing to see how much the class had changed over the roughly four years. Though the faculty triumphed the basketball game, everyone enjoyed the evening. The senior class had a phenomenal time watching their fellow classmates, as well as reflecting on the good times had here at Chaminade.

Yesterday (March 1), Chaminade’s winter athletes were honored both during and after the school day. During a school-wide assembly in the morning, these athletes were presented with their respective pins from their respective sports to wear on their blazers. That evening, each team had the opportunity to gather and reflect on its season. Finally, gathered together, the MVP and MIP (Most Improved Player) awards were presented, and a highlight video produced by ETV was shown.