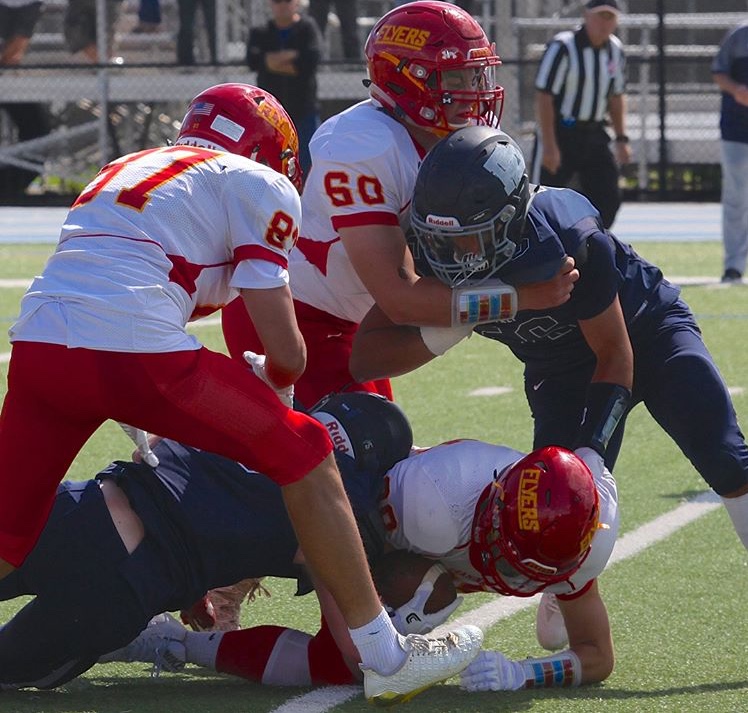 Jack Caroddo ’18 fends off a defender as Vincent Kelleher ’18 goes to the ground following a reception.

The annual hunt for the C.H.S.A.A. title begins for the varsity football team in August, when hopeful players strap on their crimson-and-gold helmets for the first time and tryouts begin.  The Flyers looked to build on an impressive 2016 season with an even better team this year, and they were confident that a successful season awaited them when training camp broke in late August.

The Flyers, now having completed their season, brought their best effort to many competitive key games, including on Sunday, October 8, when the Flyers drove up to New Rochelle to compete with the Iona Prep Gaels.

The Flyers entered the game with a 2-2 record, following losses to Monsignor Farrell and Archbishop Stepinac, and wins against Christ the King and Poly Prep.  Chaminade looked to get on a roll with a win up in Westchester County and hopefully start a winning streak.

The Flyers played hard but would eventually fall 45-24 in a back-and-forth game with the Gaels.  Wide receiver Chris Nicholas ’18 led the team in receiving with 9 catches and 174 yards.  The offense totaled 468 yards, and had 186 rushing yards, led by quarterback Tommy Rogan ’19.  Rogan also went 17-for-24 passing the ball, throwing for 282 yards and registering a completion percentage of 71%.

Meanwhile, on the other side of the football, the Flyers rushing defense stymied the Gaels, who mustered under 100 yards on the ground, but the D also made a few key mistakes that would eventually allow the Gaels to prevail.

Head coach of the varsity football team, Mr. Kevin Dolan ’85, said, “The team had four key mistakes, as a whole, that caused the loss in that game, all of which allowed Iona Prep touchdowns.  The offense turned the ball over twice, and the defense had two miskeys.  We’re a great football team; we just need a couple more wins coming up.”

Coach Dolan and the rest of his coaching staff, including Mr. Darrin Dawber and Mr. Michael Dolce ’99, all noted that the team had gelled together to work successfully as one unit.

After the loss, the Flyers played their final three games against St. Peter’s, St. Anthony’s, and Cardinal Hayes.  Chaminade was handed two gut-wrenching losses (one to St. Anthony’s and the other an overtime loss to Cardinal Hayes), but rebounded with a convincing win over St. Peter’s to end the regular season.

The team’s path to victory against Cardinal Hayes was within grasp after a touchdown run by Aidan Ryder ’18 with 4:06 remaining, which made the deficit just 3 for the Flyers.  The Flyers, needing a field goal, executed a perfect onside kick, resulting in a key recovery, making overtime much more likely. Chaminade drove down the field and kicked that necessary field goal, sending the game to overtime.  However, after all the hard work involved in coming back from a 10-point deficit, the Flyers fell 41-40 in the first round of overtime.

After finishing the regular season with a 3-5 record, the team looked to reinvent themselves after earning a playoff bid.  The Flyers earned not only the sixth spot in the eight-team playoff, but the squad also earned top-75 honors among New York State varsity football teams. (There are over 900 teams statewide!)  The top four teams in the playoff are each ranked in the top-50, as the C.H.S.A.A. is known for being a very capable league.

After the regular season, the Flyers faced another tough opponent in Archbishop Stepinac on November 5 in the quarterfinals of the playoffs.  The game was in White Plains, and both teams were eager to advance to the semifinals.  After a hard-fought game, the Flyers were eventually bested, and falling 48-38.

“We lost, but it was the best game that we played as a team,” said senior Chris Nicholas.  “Everyone was involved and dedicated to winning the game; it was a great time.  We are all brothers, and everyone played for each other.”

“These kids inspire me.  Being in the game of football for nearly my entire life, I have never encountered football players who inspire me more,” said Coach Dolan.  “They truly never quit.”

Dolan was ecstatic about the team’s success this year, and he was very proud to see the Flyers place higher in the playoffs than the preseason rankings suggested.  Overall, the team’s captains – Liam Siegler ’18, Jack Shelley ’18, and Colin Hanley ’18 – all had an especially key impact on the team’s success.  Siegler lead the entire C.H.S.A.A. with 11 sacks in 8 games on the season.

The Flyers, although defeated on the field, spiritually and mentally prevailed as they grew closer throughout the season.  They won’t remember every play this year, but the teammates and coaches will never forget the memories they made together.