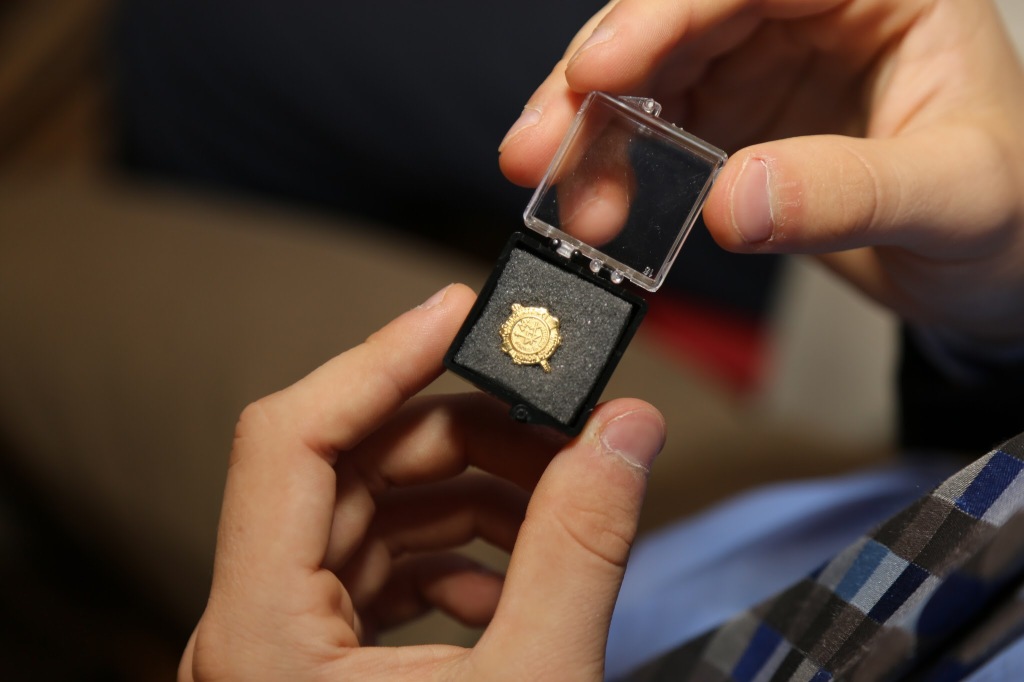 A student admires his gold pin, awarded for three consecutive years on the honor roll.

This past Friday, September 29, Chaminade’s upperclassmen joined faculty members in the Activity-Athletic Center for an annual assembly to recognize academic achievement.  This event involved the distribution of several accolades, ranging from induction into the National Honor Society to recognizing the senior with the highest three-year average.

Before beginning the event, students and teachers piled into the facility while Chaminade’s Gold Band, under the direction of Mr. Brian Lewis, performed several catchy songs.  After everyone was seated, seniors in the National Honor Society walked in as the band played “The Prince of Denmark’s March.”  Following a prayer led by Bro. Patrick Sarsfield, S.M. ’86, Assistant Principal of Academics Mr. Robert Paul ’92 began to announce the recipients of several prized awards.

The first award presented was the John T. Darby Award, given to two seniors, Gavin Ford and Nicholas Plante, both of whom earned 99.9 averages their junior year.  Next the Albert Kozar Award was distributed to junior Daniel Garcia, who ended his sophomore year with a 99.7 average.  Rounding out the bunch were sophomores Liam Brown and Vincenzo Montoni, who received the Louis J. Faerber Award for attaining 99.7 averages during their freshman year.  The Thomas J. Powers Award, given to the senior with the highest cumulative average during his years at Chaminade, was then awarded to Shawn Connell, who entered his senior year with an outstanding 99.9 three-year average.

Mr. Vincent Jeffrey ’04 then took the stage and introduced the new National Honor Society officers, all members of the senior class who had been elected by their peers.  Shawn Connell was elected president, Nicholas Plante vice president, and Gavin Ford and Christopher Mercadante assistants.  New members of the Society, selected for maintaining at least an 85 average and having participated in two-or-more clubs, were then called up to the stage to be inducted.

Assistant Principal for Guidance Mr. Daniel Petruccio finished the assembly by commending students whose PSAT scores qualified them for recognition by the National Merit Scholarship Program, as well as those students who received accolades from the National Hispanic Recognition Program.

Peter Camporeale ’18, who received national merit recognition, humbly reflected, “I am, of course, very grateful for the recognition of my efforts, especially in a national competition.  But, I know plenty of my classmates, although not officially commended, also deserve a great deal of recognition for their results.”

This assembly is an important way to recognize the efforts of students who have gone the extra mile to succeed academically and to encourage the entire student body to continue striving for personal excellence.

“I’m extremely proud to be able to represent the National Honor Society as its president,” said Shawn Connell. “The hard work everyone in the school puts in is something that really inspires me.”