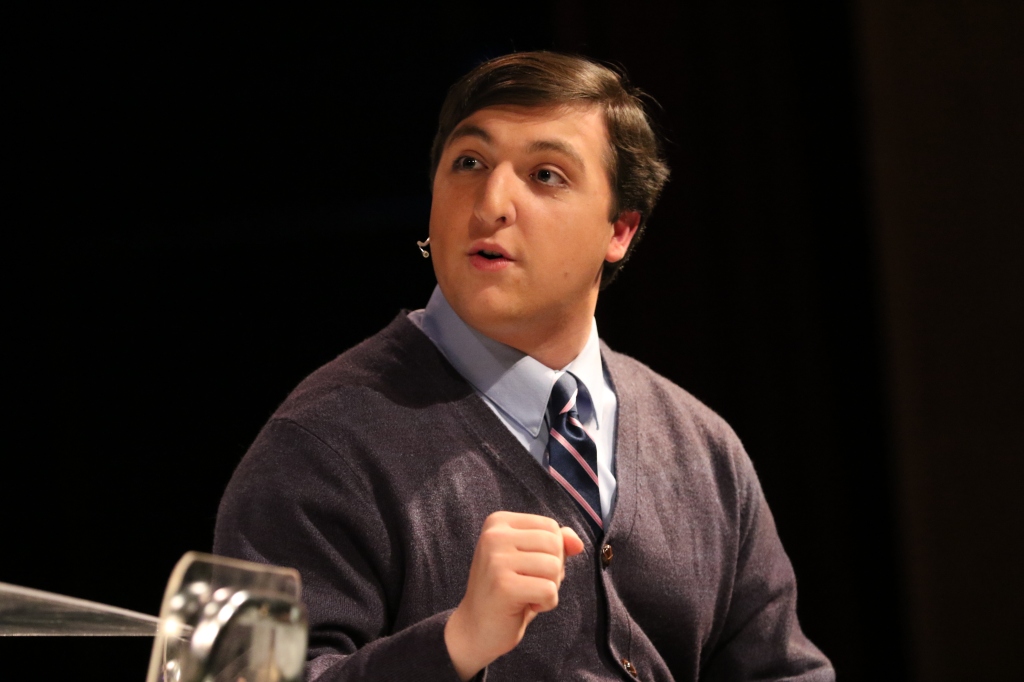 Massimo Indolini ’17 gave his first performance as a Darby Player in "The Dining Room."

Conceptually, to base an entire stage production around one table would be thought of by many as dramatic feat capable of being accomplished by only the best in the Hollywood industry. When the Darby Players were challenged with that circumstance, they shined this weekend in an impressive performance of A.R. Gurney’s The Dining Room.

The Darby Players did a marvelous job displaying the many conversations had among those sharing a meal in their performance, which simulated various situations one might encounter while eating. Directed by Mr. Michael Bruno ’90, the Players performed on Friday, Saturday, and Sunday, November 18 through 20.

The actors and actresses in the play consisted of students from Chaminade, Sacred Heart Academy, and Our Lady of Mercy Academy. The play was centered around one table in a dining room, which made the performance a tall task for the Darby Players, as actors had to transition from many different roles in many different families in a short period of time.

The play delivers the message that cultural values are changing as new generations arrive, as clearly demonstrated throughout. For instance, a young man in the play wants to move away for his education, and he seeks out a school in particular because of its beautiful surroundings and its indoor hockey rink. Not forgetting to mention that most kids move away for their educations during the times, the boy asks his grandfather to pay for his education. The grandfather, in turn, has a hard time understanding this concept, saying that back in his day, nobody went away for an education. In fact, the grandfather dropped out of school when he was a kid to get a job and financially support his family. He said that he was a self-made man, and suggested to his grandson that he shouldn’t let this school make him; instead, he tells his grandson to make himself.

Despite the wide range of different roles and the very high difficulty level of The Dining Room, the Darby Players put on a wonderful show which offered both entertainment and moral value.

“It was a unique experience, and I really enjoyed this creative process with the other talented actors and actresses,” said Richard Nesler ’18, a Darby Player.

The Darby Players’ next performance will be in the spring, when they stage the classic play Pippin. Having taken the challenge presented by The Dining Room’s unique nature in stride, the players have built a range of new acting abilities upon an already-strong foundation.