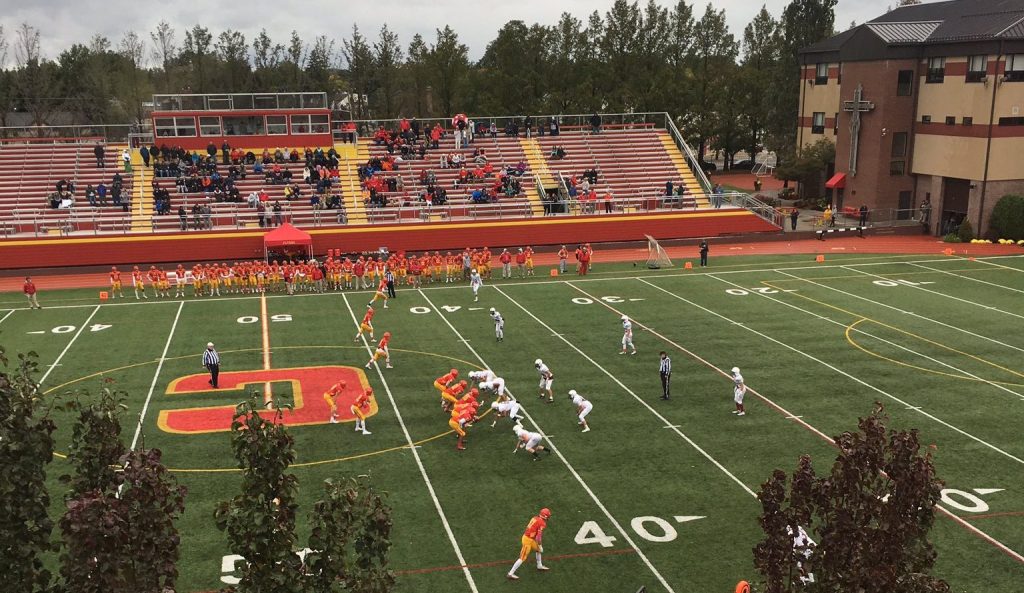 “We are the Flyers, strong and warriors bold.…”  Those words, part of the Flyer Fight Song, echoed through Gold Star Stadium on Saturday, October 22, a day on which all three levels of Chaminade football captured victories.

The Varsity Flyers defeated Fordham Prep 42-27. The poor weather conditions may have been the cause of some sloppy play, but the Flyers persevered and dominated the Rams.  The first quarter was a back-and-forth struggle between the two teams.  However, the Flyers pulled ahead after Francesco Tangredi’s ’17 touchdown run with less than a minute remaining in the quarter.

In the second quarter, the Flyers extended their lead after two field goals from Liam Dvorak ’17.  Late in the quarter, the weather turned from bad to worse, pelting the Flyers with what felt like the first sleet of the year.  The Flyers lost their focus and gave up two touchdowns in a one minute span, leaving the team trailing 20-13 at halftime.

After halftime, however, the precipitation lightened, and the Flyers came out of the locker room ready to take control of the game.  The Flyers opened the scoring in the second half with a touchdown, followed by the extra point, to tie the game.  With four minutes left to go in the quarter, Dvorak, who connected on a total of four field goals in the game, gave the Flyers a lead they would never relinquish. From that point on, the team was in cruise control.  While the offense excelled, the defense led by Colin Hanley ’18, John Licurse ’17 and James Errante ’17, kept the Rams off the scoreboard to close out the game.

The vibe in the Flyers’ locker room after the game was very positive.  As Robert Scala ’18 put it, “Even though we were down at the half, Coach Dolan reminded all of us to lock it in and play the second half the way that we knew we could.  This win only strengthens us going forward as we look to finish strong headed into the playoffs.”

The JV and Freshman squads also dominated. The JV team  triumphed in a 38-12 victory over the St. Francis Prep Bulldogs, and the freshman team snagged a narrow 18-13 victory at St. John the Baptist.

The Flyers can only continue their winning ways with your support. Go out and cheer for your team!