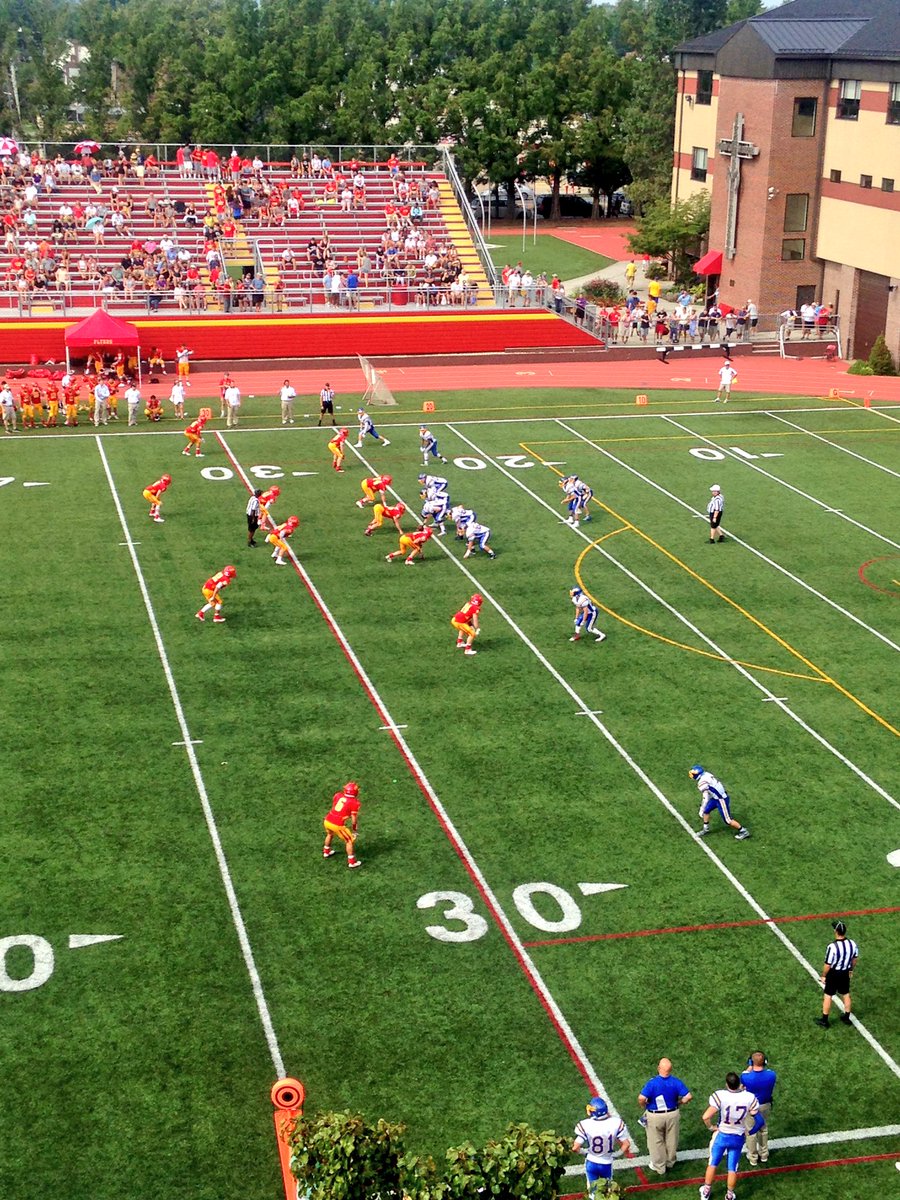 One goal for any team at the beginning of a new season is to establish a new identity. This is especially true for the Chaminade varsity football team.  The Flyers have had 10 long months to digest a season in which they suffered one gut-wrenching loss after another.  On Saturday, September 10, in a 42-20 win over longtime rival Kellenberg, Mike Kelleher ’17 made 2015 feel like a distant memory.

On fourth down from the Kellenberg 45-yard line, Kelleher, normally a tight end, lined up as a wide receiver.  Quarterback Matt Chmil ’17 took the shotgun snap and surveyed the field.  He spotted Kelleher racing down the left sideline, and launched a deep downfield pass, a perfectly thrown ball to his wideout’s back shoulder.  Kelleher out-jumped his defender to make an incredible, one-handed, Odell Beckham Jr.-like grab at the 15-yard line.  He then tip-toed the sideline with precision and sprinted into the end zone for the score.

Kelleher’s catch drew the attention of the sports news website Bleacher Report. The national outlet has posted a video of Kelleher’s insane grab on its Twitter page, and it has already been retweeted over 1,000 times.  It was the perfect way to set the tone for a new season.

“It’s nice to have the attention, but it’s not all that it’s cracked up to be,” said Kelleher of his sudden fame.

While “the catch” got its rightful attention, the entire Flyers squad put together an encouraging, if not resounding, performance to open the team’s 2016 season.  The Flyer offense, led by Chmil, drove down the field with ease all afternoon, scoring touchdowns on the unit’s first six possessions.  Chaminade torched the Kellenberg defense for 411 yards of total offense.  It was Chmil’s dual-threat playmaking ability that had the Firebirds confused, as he contributed with both his arm and his legs.  He was 10-of-11 for 182 yards and a touchdown through the air, and added 79 yards and three touchdowns on the ground.  Running back Frank Tangredi, a junior, added five-yard yard rushing score of his own.  The defense was spearheaded by middle linebacker James Errante ’17, who racked up eight tackles, with two for a loss.

The win came on the debut of first-year head coach Kevin Dolan ’85, who says he’s thrilled to be taking over at his alma mater.“

“Serving in the capacity as head coach at Chaminade is an honor and a dream come true,” said Dolan when contacted via email.  “My 84-year-old mother told me when I got the job, ‘It took me and your father five months to get you to agree to go to Chaminade and four years to convince you to leave!  It’s nice to know you are home again.’”

Coach Dolan will be assisted this season by a staff full of other new faces. Coach Michael Dolce ’99, who will be the main assistant coach, has moved up to the varsity staff after serving as the head coach of the junior varsity team last season.  Coach Darrin Dawber will be the quarterbacks’ coach this year, and is eager to help turn the football program around.

“One of our main goals for the season is to learn how to win again,” said Coach Dawber.  “We also want our players to improve each and every day, and also to continue to represent Chaminade with class.”

Despite all of the losing that Chaminade endured last season, Coach Dolan has no intentions of changing the team culture established by his predecessor, former head coach — and former NFL linebacker — Mr. Stephen Boyd.

“I have been lucky enough to head a program that is Stephen Boyd-trained and Stephen Boyd-tough. I can never thank him enough for his support, dedication, and his friendship,” said Coach Dolan.  “Chaminade is the culture.  It is incumbent upon the staff to fit within that culture.  Our program’s culture can be  summed up by our school motto – strength in unity.”

That unity was forged in part by a preseason trip to Pennsylvania for training camp.  On the trip, the Flyers did practically everything together.  Coach Dawber said, “The trip went a long way towards building up team camaraderie, and our players learned how to be good teammates.”

The rookie head coach also said that he is confident the Flyers can return to contention in the CHSFBL.“This team is capable of anything,” said Coach Dolan.  “They are on a journey. They are athletic, strong and smart. The challenge for our boys is how will they respond to adversity. I suppose that’s the question for all of us. I am proud of this team, the program, our staff and my school. It will be an exciting year of football.”

“This team is capable of anything,” said Coach Dolan.  “They are on a journey. They are athletic, strong and smart. The challenge for our boys is how they will respond to adversity… I am proud of this team, the program, our staff and my school. It will be an exciting year of football.”