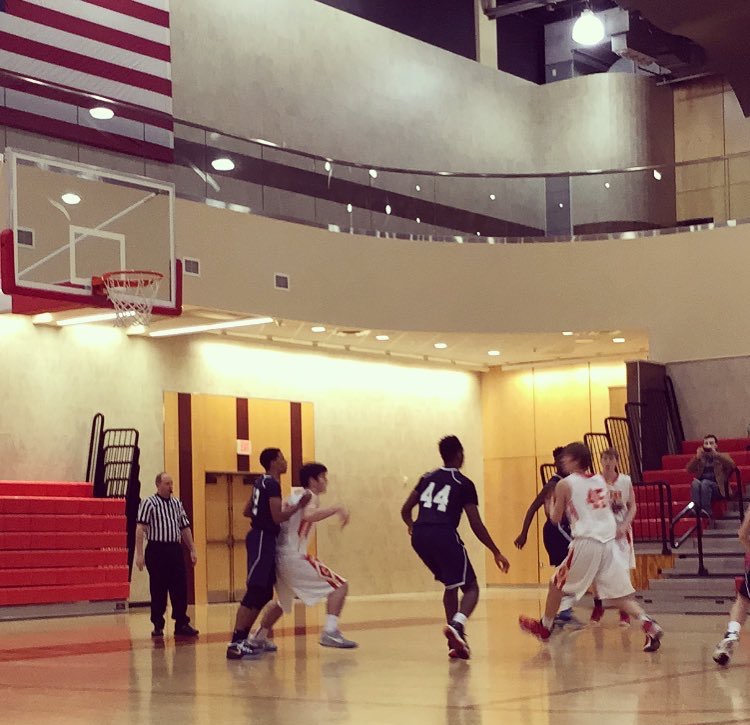 Nolan Prendergast ’16 sprints into the paint as Charles Salter ’16 sets a pick.

In their their last game of the regular season, Chaminade’s Varsity Basketball team faced off against St. Mary’s on Friday, February 19.  The game also served as Senior Parents Night, an opportunity for the parents of the players to enjoy quality time with their athletes.

In the first quarter, the Gaels put up a strong performance and scored 15 points, forcing the Flyers to regroup. Soon the Flyers gained control of the game, which proved especially clear in the last minute of the quarter. With less than 30 seconds to go, Nolan Prendergast ’16 scored the two points that tied the game at 15-15.

Quinn Suydam ’16 stated, “Despite our slow start in the first quarter, we got into the grove once we started scoring.”

In fact, after the first quarter, the Flyers outscored the Gaels every quarter roughly 2:1.  The Flyers wasted no time and racked up points.

Despite the best efforts of the Gaels, Chaminade did not give up their lead.  At the end of the first half, the score was 37-26.  The Flyers continued to outperform the Gaels in the third quarter and led 58-36. In the last quarter, the Flyers did not relax their efforts; instead, the Flyers continued their outstanding performance and won the game, 77-41.

With this win, the Flyers end their season with a record of 19-4.  “We’ve still got a long way to go, but it will all be worth it when we win the championship,” noted Owen Prendergast ’16.