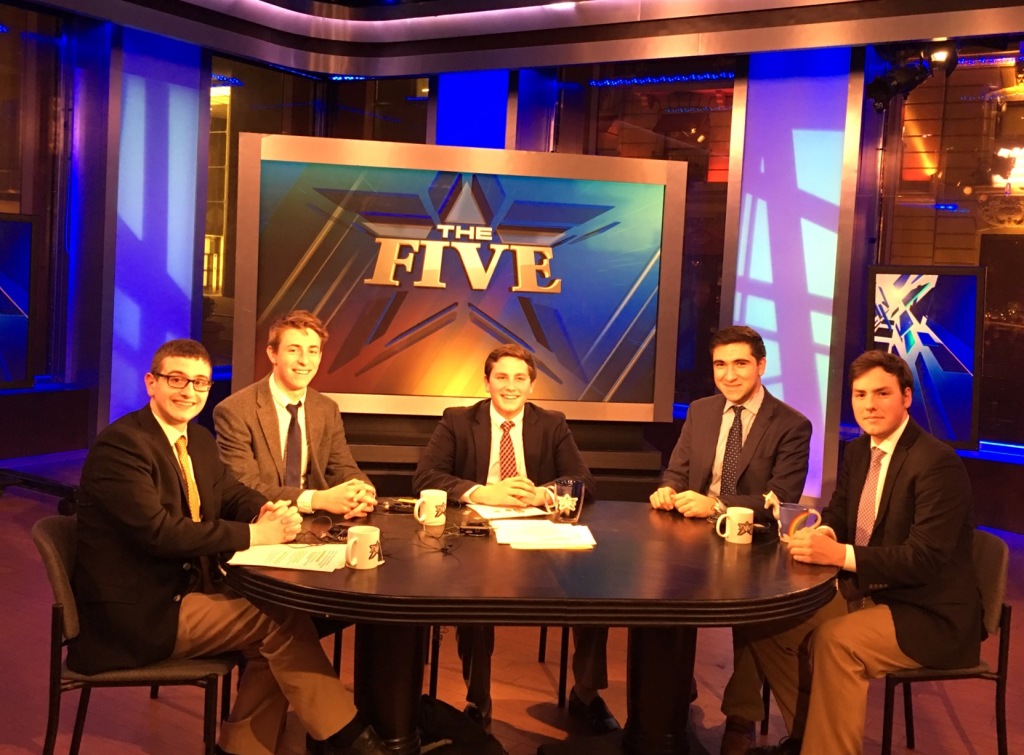 The Chaminade Speech and Debate team was very busy over the Marton Luther King Jr. holiday weekend, visiting Fox News and participating in a very challenging, yet ultimately rewarding tournament in Lexington, Massachusetts.

After departing from school Thursday afternoon, the team left from the Mineola train station to view a live filming of “The Five” at Fox News Headquarters in Manhattan.  While viewing the show, the team learned more about current events such as the upcoming presidential election, hostages taken in Iran, and the recent Jakarta bombing.

“It was very interesting to see how everything behind the scenes works, and meeting the anchors was very cool,” said  Rob Wines ’16 .

After the show ended, the team posed for a few pictures and walked back to Penn Station  to return to Chaminade briefly before journeying to Meribah.  After a satisfying Chinese food dinner at the retreat house, everyone settled down to watch the GOP debate before going to bed.

The next day, the team, accompanied by Brother John McGrory S.M. ’84, Brother Dermot Meehan S.M. ’74, and Nick DiBartolo ’15, embarked on a four-and-a-half hour bus ride to Massachusetts.  Arriving and relaxing at the Burlington Marriott Hotel, they anticipated the dinner that soon approached.

When dinner-time finally arrived, the Flyers packed back into the bus to head to Dabin, a local Japanese restaurant.  The team enjoyed a lengthy and delicious feast, shared stories and spilled more than a few drinks.  Finally, the team headed back to the hotel to get some much needed sleep for the following day’s rounds.

After getting an early start on Saturday, the team went their separate ways. The three Public Forum teams along with volunteer Public Forum judge Nick DiBartolo went to Lexington High School, while the five Lincoln Douglas debaters went to nearby Clarke Middle School.  The team spent the remainder of Saturday in and out of rounds, debating some of the best schools in the country and relaxing when they could.  By the end of the night, the Flyers finally returned to the hotel to attend Mass, courtesy of Father Michael Tidd of Delbarton.

The next day, the last preliminary rounds were held, allowing the debaters to finish much earlier than the previous day.  Owen Hanley ’17 and John Michael Magloire ’18 finished the tournament as double-octo finalists, both receiving plaques for their effort.

With the debating finally over, the team was able to relax for a few hours and enjoy a meal at Bobby’s Burger Palace, before going to bed early for some well-deserved sleep.  After a short breakfast in the morning, the team got back onto the bus for another four-and-a-half hour trip home.

The team knew in advance that this would be a difficult tournament with some fierce competition.  Although the tournament was as hard as expected, the team did very well as a whole, and walked away feeling very lucky to have participated in a such rewarding tournament.