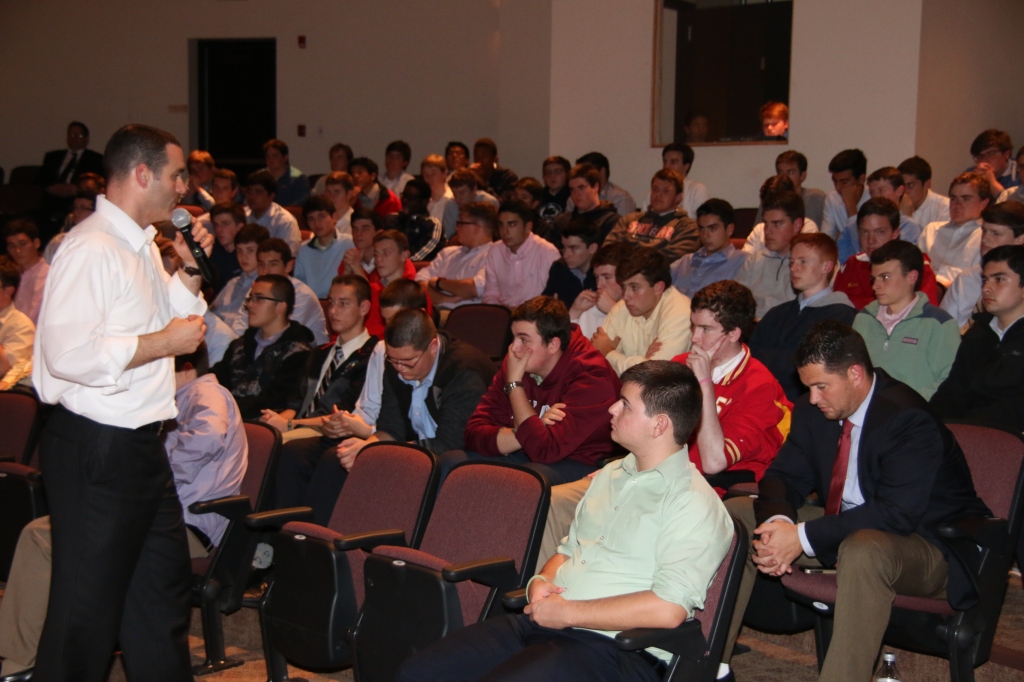 The world is complicated.  Hardship and sorrow lurk around every corner. Times of triumph are easy, but our true colors show when we resolve a difficult decision or overcome a challenging time in our lives.  The Junior Evening of Recollection, “Get Colorized,” focused on this idea.

To begin the night, the Culinary Club prepared a build-your-own-burger bar for the hungry students.  Juniors created innumerable combinations of sizzling beef patties, cheese, lettuce, tomatoes, sauteed mushrooms, and bacon.  After dinner, the Class of 2017 and faculty members selected candles as they filed into the Hearst Auditorium.  Students then listened to three faith talks from Mr. Joseph Amorizzo ’07, Mr. Michael Dolce ’99, and Mr. Thomas Ca
ssidy ’93.  Between talks, students with a certain color candle processed onto stage to put their candles on a platform that housed the lit colored candles and later the monstrance holding the Eucharist.

“The speeches delivered during the event that were given by Mr. Amorizzo, Mr. Dolce and Mr. Cassidy all had examples of something that came into their lives unexpectedly,” said Alphonse Sicignano ’17.  “God helped all three of them find purpose in life or overcome the difficulties that they have each faced during their lives.  In tough times they showed their true colors.”

Introduced by Mr. Michael Foley ‘99, Mr. Amorizzo first took the stage to give witness of his true colors.  He talked about his childhood and journey through Chaminade.  As a child in elementary school and middle school, he lazily went through his education.  His older brother attended Chaminade, so he went to the open house.  Loving the school and working hard to earn admission,  Mr. Amorizzo was accepted and graduated with the Class of 2007.  After graduation, however, he vowed that he would never again walk through the doors of the school. Even though he liked the school, he hated the work load.

He enrolled into John Jay College to major in forensic science in the fall of 2008.  After realizing this path was not for him, he transferred to  C.W. Post to become a chemistry teacher.  He believed that by studying chemistry he could easily find a job, but his expectations fell short.

For two years he went from job to job including working at TD Bank and being a substitute teacher.  His morale suffered because of his self-assessed inability to succeed; however, he soon received an email from Mr. Robert Paul ’92 saying that Chaminade had openings in the science department.  Mr. Amorizzo seized the opportunity and started teaching in the same school he vowed never to step foot in again.  His faith became strong again, like when he was a student.  This helped him show his true colors in everyday life and in tough scenarios.

One of the toughest life scenarios he had ever encountered sprung up late in his first year of teaching.  At his first retreat as a moderator, everything went according to his plan.  Everyone behaved, which allowed them to have a lot of fun and spiritual growth; however, one of his students was praying in the chapel long after even he and Mr. Michael McCarthy, another moderator, left.  He was struck by the student’s devoutness and thought nothing else of it, but that student was Thomas Miloscia ’15, praying for a cure to his cancer that would tragically place him in God’s hands at a young age.  Mr. Amorizzo learned about Tom’s condition, which tested his faith greatly, but he always tried to carry himself as Tom did, with a smile on his face no matter what difficulty he faced.  He ended his personal story saying that he will continue to live as Tom did and make sure that Tom’s life will inspire his students for years to come.

Following Mr. Amorizzo’s anecdote, students and teachers with red candles processed up the stage and placed their candles onto the designated structure.  Mr. Foley then introduced Mr. Dolce.

During his time at Chaminade, Mr. Dolce involved himself in his faith.  After graduating, he moved on to Saint John’s University where he played football; however, the goals he set for himself in college led him down a wrong path.  He wanted to do well in football, meet girls, and go to a lot of parties.  Even though his dorm was in the same building as the chapel, his spiritual life disappeared.

As he progressed in his college education, Mr. Dolce had a crush on a girl named Jackie, but she denied him several times previously.  He finally got the opportunity to take her out to dinner and planned on using his parents’ emergency credit card to fund it.

After graduating St. John’s, he managed a restaurant; however, he loathed the job.  One day he drove past his alma-mater, Chaminade and stopped in.  He went into the chapel and sat in the same seat he had sat in everyday as a student.  He was inspired by how reverent and devout the students were during Eucharistic Adoration, so he then spoke to Mr. Robert Hazleton ’82 about a volunteer basketball coaching position at Chaminade.  He got the position and would become a teacher and then guidance counselor a few years later, bringing him to where he is today.  After finishing his speech, the blue candles went on stage, and, following a few minutes of prayer, Mr. Cassidy was ready to close out the speeches.

It was Mr. Cassidy’s time to shine, and he came out of the bullpen on fire wearing an orange shirt with a green vest.  He thanked the students for coming, Mr. Foley for inviting him to speak, and Mr. Daniel Terzulli and Mr. Peter Accardi for letting him borrow their clothes.  The crowd erupted with laughter and it was hard to tell if it was a faith event or stand-up comedy show.

A lover of English literature, Mr. Cassidy graduated from Chaminade in the top ten percent of his class and went on to Saint John’s University on a full scholarship to become an English teacher.  After teaching in Queens for a few years, he returned to Chaminade.  He teaches English and Spanish and moderates the bagpipe and pep bands.  He joked that he would soon receive the title Assistant Principal of Auxiliary Music and that his office will be the faculty bathroom next to room 106.  Once again, the audience laughed uncontrollably.

Mr. Cassidy then dove into his witness talk about his experiences as a teacher, husband, and parent.  He and his wife had their first child with a few complications, but the baby, thankfully, was perfectly healthy.

The family then had a second child, but the baby was born with serious health complications.  His wife had placenta previa, a condition which compromises the placenta that supplies oxygen and nutrients and removes waste from the blood.  One night around 3 a.m., Mr. Cassidy’s wife had severe cramping.  They called the doctor and prepared to go to the hospital.  He awakened his three year old daughter and told her they were going to have a sleepover at someone’s house.  While the crowd laughed, he took a moment to gather himself before speaking on a very emotionally taxing time in his life.

Upon arriving at the hospital, they met their doctor who happened to be on call.  The doctor thought everything was fine at first, but things turned for the worse and an emergency operation was necessary.  Mr. Cassidy frantically called family members and waited in the hallway, praying for the best.  This time was the longest of his life, for he could not imagine losing both his beloved wife and precious unborn son.  After waiting for hours, the doctor told him that they had saved his wife, but he did not mention anything about the child.

Fortunately, the baby boy survived, born at 23 weeks and 6 days.  Thomas Cassidy, Jr. was a premature birth, which led to many complications.  He was small and weak, weighing one pound, six ounces and measuring 12 inches. Mr. Cassidy showed the audience a diaper for a child that young to demonstrate the baby’s size.

The baby grew in a bubble-like machine in the N.I.C.U. (Neonatal Intensive Care Unit) under constant watch of nurses and doctors.  While under extreme stress, Mr. Cassidy was met at the hospital by the pastor at his parish, Father John.  Father John consoled him and read a passage from Saint Paul’s letter to the Corinthians, chapter 13, which discussed faith, hope, and love.  He also gave him a prayer card and talked about baptizing the child.  While Mr. Cassidy was too overwhelmed to baptize his child at that very moment, he was instructed to baptize the baby himself in case of an emergency.  That Sunday, Mr. Cassidy and his wife went to church and heard the same reading about faith, hope, and love.

The baby underwent two eye surgeries and a heart surgery. Thomas Cassidy, Jr. also had a Stage 4 Brain Bleed, which could result in mental disability or even death.  Mr. Cassidy, his wife, and Father John made the decision to baptize the baby from inside the N.I.C.U. Bubble.

They did this baptism without the doctor’s consent so they wouldn’t be stopped for medical reasons.  Two of the nurses who were also Christian assisted them with the baptism by putting up curtains for privacy.  Father John reached into the bubble and baptized Thomas Cassidy Jr. by putting three drops of water on his head and making the sign of the cross over him.  The baby wore a tiny tuxedo made by volunteers who sewed little clothing for special occasions for premature babies.

From that point on, things started to improve.  The doctor informed the family that the brain bleed was completely healed, though there was no medical evidence for this happening.  The family saw this as a miracle from God.

After 161 days, Thomas Cassidy, Jr. was able to leave the N.I.C.U. and go home.  Thomas is currently completely healthy and doesn’t have any medical problems except for having to wear glasses, a normal condition.

“It was a really fun experience to hear our teachers’  backstories,” said Sean Maguire ’17, “and to understand how they were able to improve their faith through tough times.”

After yellow and green candles were placed atop the tower, students had a few moments of silent prayer before the Eucharist was brought to the table so that all those in attendance could pray in His presence.

“Get Colorized” was a successful spiritual event. Students left the Hearst Auditorium with lessons to guide them for a lifetime.