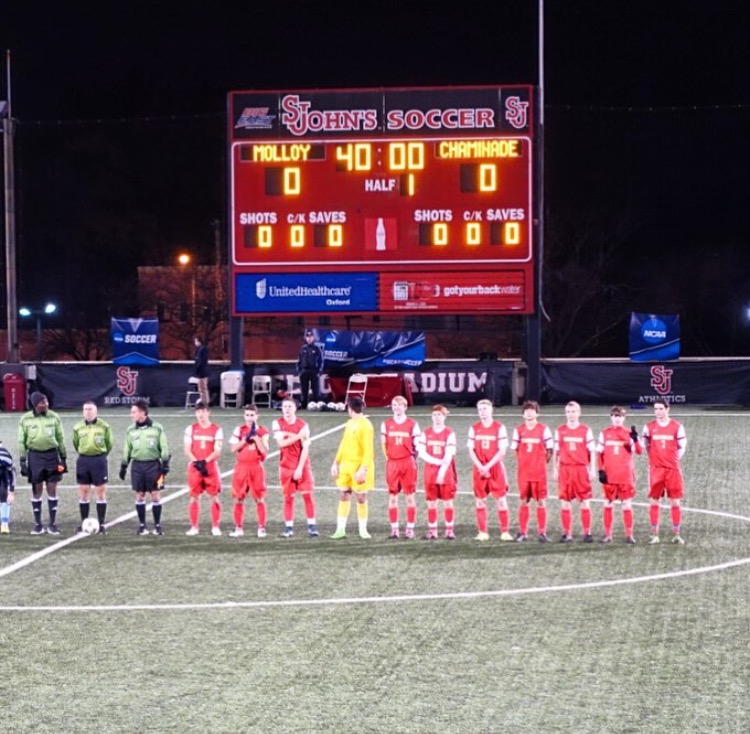 The Chaminade Varsity Soccer team lines up along the mid-field line at St. John’s University’s sports complex, prior to the start of the State Qualifier game.

Chaminade’s varsity soccer team faced Archbishop Molloy on Friday, November 13 for a spot in the CHSAA title game against Canisius High School.  The Flyers entered the postseason with the intent of playing in the state championship game for the first time in five years; however, in order to do so, they had to defeat a formidable Molloy squad that amassed a record of 12-1-5 over the course of the 2015 season.

Early on, the Flyers dominated possession of the ball.  They were patient offensively, waiting to pounce as soon as the Molloy defense made a mistake.  This strategy paid off when Alec Brutschin ’17 scored a fifth-minute goal from ten yards out to give Chaminade an early 1-0 lead.

Eager to extend their advantage even further and put the game out of Molloy’s reach, the Flyers became more aggressive offensively, taking multiple shots to wear down the Molloy defense.  This quick pace inevitably led to a few Molloy counterattacks; nevertheless, the defense, led by Kevin Lee ’16, had an answer for everything that the Stanners threw at them.  By continually shutting down the Molloy attack, the Flyers set the tone for what would be a tough night for the Stanners’ offense.

For a good portion of the first half, both teams traded possession frequently.  Each team’s shots often sailed wide of the goal, with the strong November winds affecting the players’ accuracy.  These winds, when combined with both side’s defensive intensity, resulted in a half where neither team particularly shined on offense.  After goalkeeper Yanni Rigos ’17 thwarted Molloy’s first solid scoring opportunity of the half, time ran out.  Chaminade entered the intermission with a 1-0 lead and were a mere forty minutes from playing in their first state championship game in half a decade.

The Flyers came out of the break firing on all cylinders, looking to pull away from Molloy and cruise into the state title game.  Just three minutes into the half, Matt Vowinkel ’17 was fouled when attempting a shot in the box.  The ensuing penalty kick soared off his foot, past the diving goalie and into the top left corner of the net.  His fourth goal of the postseason pushed Chaminade’s lead to 2-0, and it became apparent that the overmatched Molloy team would need a miracle to pull out a victory.

Soon after, the Stanners, desperate to close the gap and keep their season alive, began to ramp up the intensity on offense.  Though there were multiple times where it seemed as if Molloy might break the shutout, the Flyers did  not concede.  After withstanding the Stanners’ onslaught for the time, the Flyers took control of the game once again.

With time quickly running out, the Flyers looked to net one more goal to put Molloy away once and for all.  They succeeded, as Matt Vowinkel directed a cross from Timothy Davis ’17 into the net.  This 68th minute goal, Vowinkel’s second of the game, extended the lead to 3-0.  This marked Chaminade’s third score in just five shots on goal, a remarkably efficient percentage.

With the game out of hand, the final few minutes of the match were merely a formality. Both teams took their foot off the gas pedal and slowed the pace of play tremendously. Time soon ran out, and the Chaminade bench stormed onto the field to celebrate their first trip to the state finals in half a decade.

“Winning tonight felt amazing, but we’re not satisfied yet. Hopefully we can go out on Sunday, perform well, and win that state championship,” said Jason Ward ’16.