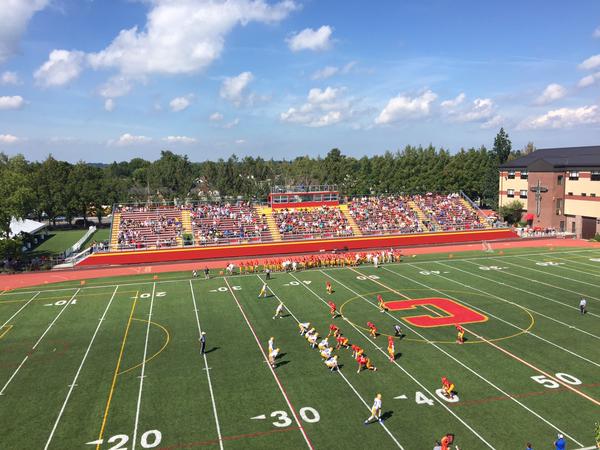 The varsity and J.V. Chaminade football teams began their league campaigns on Saturday, September 19 at Gold Star Stadium with high hopes to start their journeys on the right path with wins over the St. Peter’s Eagles of Staten Island.  Parents and alumni packed the stadium to support the Flyers.

The J.V. team, seeking a second-straight win after their victory over Poly Prep on September 12, started the festivities at 10:00 AM.  Chaminade elected to kickoff after winning the opening toss but received the ball back after some strong plays by the Flyers’ defense.  Liam Siegler ’18 and Isaiah Cashwell ’18 sacked the Eagles’ quarterback and overpowered St. Peter’s offensive line throughout the game.  On their first drive of the game, Chaminade marched down the field and scored.

The Flyers were spurred on by a catch by Christopher Nicholas ’18 on the fourth down for a first down.  John Shelley ’18 scored from six yards out to give the Flyers the lead.  The combination of Shelley’s hard running and a powerful offensive line led the first half for the offense.  Shelley scored twice in short yardage, ripping off two long runs and receiving 14 carries, contributing to a finish of 17 in total.

On defense, the Flyers forced two turnovers with a gang tackle, forcing a fumble recovered by Jake Reagan ’18 and an interception by Dominick Speranza ’18 that set up the second Shelley touchdown.  With just seconds left in the half, defensive back Colin Hanley ’18 made a critical tackle near the goal line to preserve the 14-0 lead before the break.

The Flyers received the kickoff to start the second half with Nicholas running it back for considerable yardage to set his team.  The ensuing Chaminade drive controlled over half of the third quarter, as Nicholas and his fellow running backs Anthony Tangredi ’18 and Andrew Bonafede ’18 wore down the St. Peter’s defense.  Nicholas, quick and elusive, scored by evading multiple defenders and punched it in on a toss sweep to give his team a 20-0 lead.  Late in the fourth quarter, the Flyers defense allowed their first touchdown of the season, ending a nearly two game run of impenetrability.

St. Peter’s recovered an onside kick after scoring, but the Chaminade defenders met the challenge once more to seal the game by stuffing them four times.  That strong Flyers defense, along with the forceful running on offense, led the Flyers to their second win of the season and a great start to their league campaign.

Ninety minutes later, the varsity teams for both schools were ready to begin their matchup, kicking off the league season for both squads.  Chaminade sought to shake off last week’s loss to Poly Prep with a convincing win.  St. Peter’s began with the ball, and proceeded to roll down the field and score.  The Eagles ran and passed with equal success, especially on third and fourth down, a trend that continued throughout the game.  James Errante ’17, Alexander Cappellino ’16, and Jack Morris ’16 led the defense, but they struggled to push the St. Peter’s offense off the field, forcing only two punts throughout the game.

The defense shone when Peter Petersen ’16 hit the Eagles’ quarterback as he threw, leading to an interception by Thomas Pohalski ’16.  The Pohalski interception was critical in two ways: it prevented the Eagles from turning a fumble by William Renz ’16 near the goal line into points, and it directly preceded a 63-yard touchdown pass by quarterback Nick Crennan ’16 to receiver Daniel McEntee ’16 to tie the game at 7.  The teams then matched touchdowns before the half with St. Peter’s scoring on another long drive and Chaminade scoring on a 27-yard pass to Tyler Toussaint ‘16 by Crennan on the fourth.

Chaminade received the kickoff, and shortly after, Crennan exploded into action for a 41-yard touchdown run to continue his exceptional start to the game, giving the Flyers a 21-14 lead.  After a huge sack on third down by Cappellino to force an Eagles punt and a stop on fourth down on the next defensive series, the Flyers seemed to have taken control of the game.  The quarterbacks then proceeded to throw matching interceptions, and the defenses for both schools stepped up on three consecutive drives until Jack O’Hanlon ’16 prepared to punt it deep into the opponent’s half of the field.  However, St. Peter’s made one of the two most important plays of the game by blocking the punt and recovering the ball with only 20 yards to go.

The Eagles quickly scored and on the most important play of the game, decided to go for two points to take the lead instead of an extra point that would have tied the game.  The bold move worked, and St. Peter’s took a 22-21 lead.  Crennan took over with about two minutes left and nearly rallied the team to field goal position, but he threw a backbreaking pick with 1:27 on the clock.  The Chaminade defense nobly fought off St. Peter’s for three downs, but a penalty on fourth gave the Eagles the much-needed first down that would seal their victory.

Despite the tough result, starting offensive lineman Joseph Gerbino ’17 saw a lot of positives, commenting that the team “brought up the intensity and worked hard as a team.”

The varsity and J.V. Flyers play at Monsignor Farrell on Saturday, September 26 in Staten Island and  return to home with matchups against Holy Cross (varsity) and Kellenberg (J.V.) on the weekend of October 3 and 4.

Come out and support the Flyers!